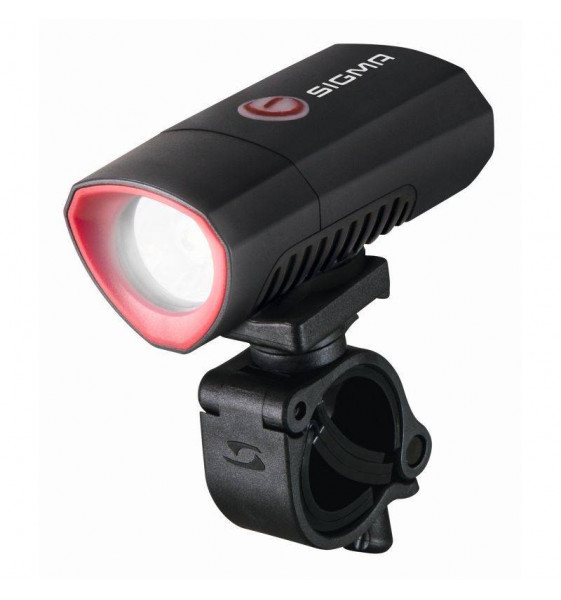 The Buster 300 headlight is perfect for your city and offroad outings. It has a power of 300 lumens and is capable of reaching 70 meters. It has four types of light, in addition to the long light and crossover function, with which you will get the optimal lighting at all times. Its assembly and disassembly is fast thanks to the how you have a slider.

Handling concept
All BUSTER series models have accidental ignition protection and are double-click activated and turned off while holding the button tight. With a simple touch of the button you switch between the different lighting modes.

If the BUSTER 300 is turned on, with a double click you can turn on the highest mode directly or go down to the lowest mode.

Great click switch
The large click switch with tactile ON/OFF response can be handled perfectly even with gloves. Double-click turns on the headlight and holding it tight turns it off. This function prevents accidental ignition inside the backpack. With a simple click you change the different light modes.

360-degree support
DThe screwed bracket secures the BUSTER 300 stablely on the handlebars and can be rotated sideways 360o. There is also a flexible silicone holder, which can be purchased separately.* This one is suitable for all handlebar shapes and is also quickly mounted and disassembled.

*In the complete game with the NUGGET II, the BUSTER 300 is supplied with the silicone holder.

Flexible fixation
The BUSTER 300 is supplied with the screw-on bracket. A support adapter is also included for fixing in action camera mounts.

Battery charge indicator
The control button works at the same time as a charge indicator and shows what state the built-in lithium battery is in. Below 75 percent of the battery capacity, the button LED lights up green, below 25 percent, it is illuminated in red. Also, during the charging process, the LED reports on the instant charging status.

Optimal temperature management
The cooling rings on the back of the headlight take care of good heat dissipation.

Fast charging
In just 3 hours, the battery is fully recharged using the micro-USB cable. Recharging is also possible during operation.

Powerful battery
The built-in lithium-ion battery has a capacity of 2000 mAh and has deep discharge and overload protection. It can be recharged using the included micro-USB cable, at any time.

Sigma is a manufacturer of odometers, cyclocomputers, tools and bike lights known worldwide for its German technology. With Sigma,superior quality is guaranteed as they employ the latest technology, manufacture designs that fit all kinds of tastes and needs, subject all their products to the strictest reliability, strength and durability tests,and all must pass EC testing.