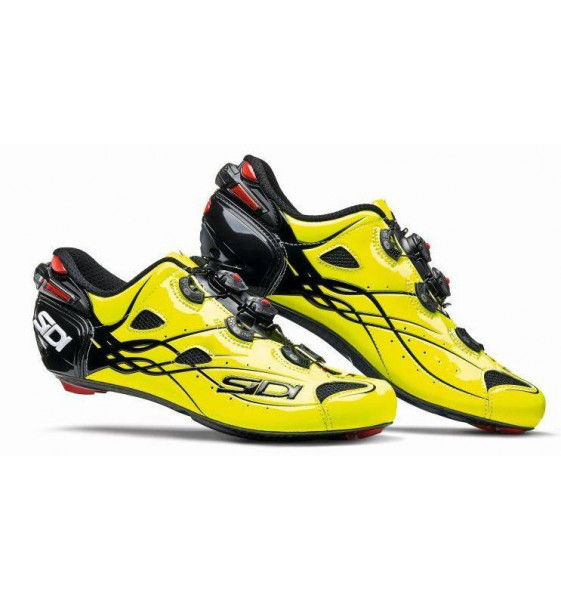 The new SIDI Shot road shoes are one of the highest-end shoes of the Italian brand SIDI, have been developed from the Wire Carbon model,with a new redesign of the instep and acentral Double Tecno 3 Pushadjustment system.

The new SIDI Shot road shoes are one of the highest-end shoes of the Italian brand SIDI, have been developed from the Wire Carbon model,with a new redesign of the instep and acentral Double Tecno 3 Pushadjustment system. Used by the best cyclists in the world like Chris Froome. It has the same sole as the Wire Carbon model, the Vent Carbo. This has been made of 3K carbon to achieve the perfect balance between stiffness, performance and ergonomics at the front of the foot. The sole provides a sliding opening air intake that allows the rider to customize cooling through the tip. The rear heel and the insert at the tip are replaceable.

SIDI has further reduced the weight of the Vent Carbon sole that now integrates into the heel an ultra-light heel and an opening at the tip. The main advantages of the Vent Carbon sole are not only a greater transfer of power thanks to its lightness and rigidity but also greater comfort in case of high temperatures. The Vent Carbon sole has been designed with an integrated opening and air channels for good ventilation and heat evacuation. The airflow circulates through the different channels and is expelled by the exhausts located in the central part of the shoe. It should be mentioned that the opening at the tip may be open or closed according to the user's need for maximum comfort in all seasons. The Vent Carbon sole has been made by hand, with braided carbon fiber that increases stiffness while allowing a slight bending of the tip. Carefully studied, this degree of flexion biomechanically relieves stress on plantar tendons and contributes to improved circulation. A scale of alignment of the cove has been printed on the Vent Carbon sole to make a 10 mm adjustment forward or backward and memorize the position of the lookcove, making it easier to replace.

The Vent Carbon sole features a replaceable heel and a polyurethane tip. In the practice of triathlon, the opening at the tip functions as drainage, thus significantly increasing the comfort of the foot after a transition in the water.

The new double SIDI Double Techno-3 Push system offers a symmetrical shoe closure for even more comfortable footwear. The famous closures of SIDI, in resistant materials and whose design allows an easy adjustment while one pedals, are adjustable and replaceable.

The reinforced heel keeps the foot in position and prevents the shoe from deforming due to extreme use or prolonged pressure.

The cycling shoes SIDI are equipped with a polyurethane-replaceable heel in the heel area. 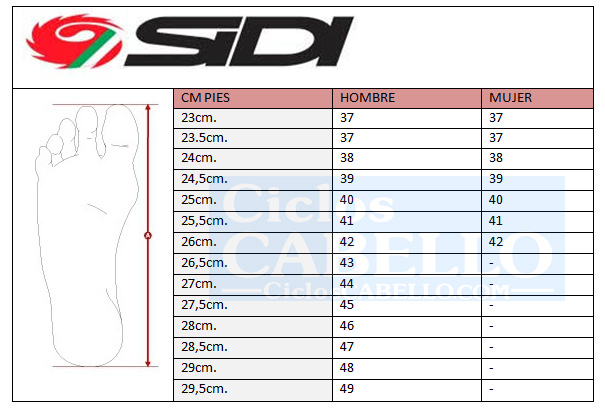 The cycling shoes SIDI, improve your athletic performance thanks to being shoes with a high technology that makes more efficient the transmission of force in each pedal stroke. In this section you can find all models of cycling shoes SIDI with amazing offers on bike shoes.